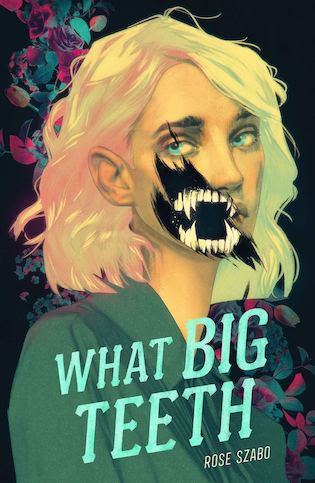 Rose Szabo’s thrilling debut What Big Teeth is a dark, gothic fantasy YA novel about a teen girl who returns home to her strange, wild family after years of estrangement, perfect for fans of Wilder Girls.

Eleanor Zarrin has been estranged from her wild family for years. When she flees boarding school after a horrifying incident, she goes to the only place she thinks is safe: the home she left behind. But when she gets there, she struggles to fit in with her monstrous relatives, who prowl the woods around the family estate and read fortunes in the guts of birds.

Eleanor finds herself desperately trying to hold the family together. In order to save them all Eleanor must learn to embrace her family of monsters and tame the darkness inside her.

Exquisitely terrifying, beautiful, and strange, this fierce paranormal fantasy will sink its teeth into you and never let go.

I thought of a way of making up with Luma. I crept down the hall and knocked on her door. “Hello?” I called out. I opened the door a crack and saw her sitting on a low chair with her back to the door. “Luma, I have an important question and I really need your help.”

She didn’t turn around from her vanity, where she sat brushing her hair. But she nodded at herself in the mirror, and I knew she was pleased.

While my room seemed like storage for old furniture, hers was all matched: white bed, white dresser, white vanity with an enormous mirror. That whole wall was lined with mirrors of all shapes and sizes. There was a copy of Rebecca tented open on her bed, and a smattering of lipsticks around it, and Jane Eyre bookmarked with a sheet of false eyelashes on the bedside table on top of a tattered book that said Birds of North America. At Saint Brigid’s you weren’t supposed to read more than one book at a time. It was considered lax. I sat down carefully on the edge of the bed and tried to figure out how to ask her what it felt like to change your shape.

“It’s like a disguise?” I said. “It seems a little more complicated than that.”

“It’s . . .” She left the brushing and rummaged in the toy box she still kept beside her bed. I felt embarrassed for her. She came out with a cloth doll in a long dress.

“Flip up her skirt,” she ordered, and, still not understanding, I did. Underneath was another head and torso of a doll. The skirt, turned inside out, was a different color. The doll, upside down, a different woman.

I looked at Luma, in her white slip with her layers of blotted pink and red lipsticks staining her sharp teeth. I tried to imagine where the other creature was.

“Why does it bother you?” she asked. “It didn’t used to. You could always keep up anyway.” She pulled up the sleeve of her robe and showed me a ring of white scars on her forearm. “You bit harder than any of us, too.”

The scars stared at me accusingly, as pearly as a set of baby teeth. I wanted to put my own teeth up against them, to prove by size and angle that they weren’t mine.

“I’m fine!” she said, and I felt even worse. What kind of sister had I been? “It wasn’t so bad. At least you don’t have teeth like us.”

“I guess I take after Mother.”

She laughed. “But she’s so quiet!” she said. “You know, I think she said something once about you being a bit like her mother. And then I asked her what she meant and she said she couldn’t tell me.”

“Our other grandmother, silly. She lives in France, I think.

Mother writes a letter every year at Christmas.”

“Have you seen her?” I felt a little kindling of hope. “Maybe I am like her.”

“I always imagined she’d be like Mother, only all over,” Luma said. I winced.

From downstairs I heard a door creak open. Grandma Persephone’s voice filtered up through the front hall, and Arthur’s, too. I’d forgotten he was going to eat with us.

“Can I borrow something pretty to wear?” I asked. “And maybe you could do my hair?”

She looked at me strangely then. “Why?”

“I just want to try something different,” I said. “I’ve worn a uniform for a long time now.”

She arranged me in front of her mirror and began taking down my hair. It was nearly the same color as hers, but somehow hers was lustrous, and mine a faded grayish white that made me look old.

“What’s this?” she asked, touching the back of my neck. It stung.

“It looks like someone pulled out a chunk of your hair back here.” She looked me over. “And you’re bruised, too. What happened to you?”

I thought of Lucy Spencer gripping my hair, yanking on it, trying to hold me back. My face burned. “It’s nothing,” I said. “I got in a fight at school.”

“Well, you’re home now,” she said. “If anyone comes after you, I’ll eat them up.” And then she giggled and hummed as she began brushing my hair.

Rose Szabo is a nonbinary writer from Richmond, VA, where they live with an assortment of people and animals and teach writing at VCU. They have an MA in English from the University of Maine and an MFA in creative writing from VCU. Their work has been published in See the Elephant and Quaint magazines. What Big Teeth is their first novel.