Check out my stop on the blog tour for Beauty and the City Chapter Magazine! 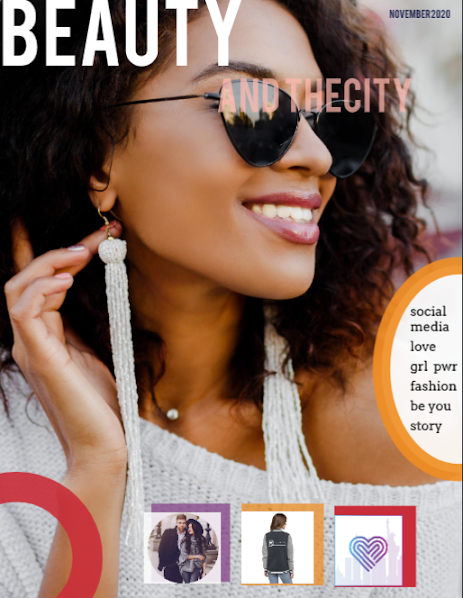 Title: Beauty and the City
Publisher: Chapter Magazine
Genre: YA Romance
Publication Date: November 2020
Summary
Beauty and the City is a contemporary love story about Milan, a young glamorous model who is hiding her disability even as she rises in popularity. Met with an internal moral dilemma, Milan finds herself at a crossroads. She wants to be the girl everyone seems to like, yet she knows there's more. Underneath this quest for self-love is a complicated goal to reignite a love she can never quite get right.

Who offers to cook at someone's house? Did she think she was running things? There was something undercover bossy about her.

I picked up my iPad from the front table and went into the kitchen, Cara still following.

“There is some homemade lemonade in the fridge. And I think Edna brought some fruit from the farmers’ market.”

“That lemonade your housekeeper makes is something good. I should have the recipe analyzed and sell the formula.”

“I am enterprising kind of a girl”

“Did you change your mind about ordering lunch?”

“Sure did. Just order me what you’re having.”

“I can drink just about anything. You think Frenchy is really hooking up with that guy she met?”

“Why would she lie?”

“Why doesn’t Sierra have a boyfriend?”

“Most people don’t want just any boyfriend. It has to be a guy she likes.”

“I kind of respect that.”

“Do you? And why do you like my brother?”

“He is so hot I can barely breathe around him. Plus I like older boys, and he’s smart. Why are you always so negative about Dimitri?”

“Only because he is so rude to me all the time. He would prefer it if my existence was relegated to an island without him. So I try my best to stay away from him. He is a love 'em and leave 'em type—FYI."

“Guys never leave me. I have had four serious boyfriends, and I have left all of them.”

“Guys from our school?”

“Two from freshman year, one from the club, and then one I met on holiday last Christmas.”

“Some guys get boring after a while. My last boyfriend was in the jerk zone. I caught him texting some girl from his school. I snatched the phone and saw she was sending him pictures of herself everywhere—eating, at barre class, at movies. So I texted her from his phone and told her to come over to his house. Then I left."

“Maybe they were best friends.”

“She was trying to take my spot. So I gave it to her.”

“ He was cute. But all he wanted to do was study on the weekend. I made sure to spike his soda with Benadryl so when she did come over, he’d be asleep, or at least his lower parts would be. Not a clean break. I mean, I certainly miss the rash his suction-cup kissing gave me around my lips.”

“Ouch! Merek’s kisses are soft. He has some friends who are girls. Who knows. I can’t wait for tonight.”

I hadn’t even heard the bell ring.

I met Merek for dinner at seven. Dinner was good, but I guess it wasn’t filling Merek up. All through dinner, he stared at me with hunger in his eyes. He complimented me on my dress like three times, and when he reached out at took my hand, his eyes seemed to be undressing me.

In the car, Merek put his hand on my leg and leaned in to kiss me before we even left the parking lot. I wondered what came next.

“My parents are gone for the weekend. Do you want to come over?”

There it was! My mouth dropped. I wasn’t shocked at the question; I was shocked that I wanted to say yes. Good girls were supposed to say no. We had only been dating for a little over two months. I just couldn’t make things that easy. I didn’t want to end up like one of Cara’s horror dating stories.

Merek drove so fast I got a little nervous and held on tight to the car door. He spun into the beach parking lot and turned the car off. He opened the moon-roof, and the moonlight glistened across his shiny hair. He had on one of my favorite shirts, a white polo tee lined in navy blue, and navy-blue shorts.

He leaned in closer to me, and I leaned back slightly. He leaned further in and waited, his eyes begging. Then I started kissing him and couldn’t stop. I had already decided to let his hands go where they may, and they did. He was pushing all the right buttons.

We never made it onto the beach. We spent over an hour fogging up the car windows, and then we watched the stars while we held hands. Merek explored parts of me no one, not even my doctor, had ever seen. I felt a little exposed yet oddly close to him. He made me want to try things I had never tried before.

Give a Gift & Get a Gift

Try our Holiday Eyeliner Kit or Our Glow Up Glitter Sticks. Have Dry Winter Lips? Try our Lip Duo. Holiday Beauty Solutions are our Specialty

Get a FREE Glow Up Beauty and the City Glitter Stick w/ $25.00 purchase
Use Code: GLOWUPSALE

Get a FREE Beauty and the City Lip Balm w/ any purchase.
Use Code: HOLIDAYLIPS

About Beauty and the City!

From personalized beauty boxes to make-up kits that highlight your skin, eyes, lips to our style blog, everything you need is in one place to show off and step out as the beauty in your city!

We are so excited to debut our beauty kits. In our Beauty and the City Chapter Magazines, The Squad is all about quick beauty on the go so they can spend more time with their baes and enjoying their city. We transformed those inspirations into special kits worthy of love from any beauty on the go.

**All of our Beauty and the City products are ALWAYS paraben-free, hypoallergenic, cruelty-free, and made with natural ingredients like peppermint oil, coconut oil, rosemary oil, and more. We believe it is important to do good on purpose. So we donate 1% of all sales to charity.

Here's How It All Begins
The beginning of the end started the summer before senior year. Seventeen years old—a record year for me. I was just a girl. The only Milan on Manhattan’s Upper East Side. Being the only anything in New York was rare. Like all girls, I had a secret. Being deaf was something I found easier to deal with when fewer people knew, so just before starting a new high school and after Mama’s accident, I reinvented myself. I left my hearing aid at home permanently, which made it difficult at times because I only had partial hearing in one ear to start with. Without my hearing aid, I really was in complete silence. Yet I had other skills that allowed me to communicate just fine. It wasn’t too soon after I started high school that I began modeling, and, well, the world looked at me in a way I sort of liked. But love—that was what confused me the most. Ihad found myself in a boy craze of the most peculiar predicament, in a tangled web that nearly took me under. They never warn you about love, and no magazine could ever do it justice.
Beauty and the City is a novel distributed in Free Monthly Chapter Magazines that feature the story.
Please share with us your thoughts and join our community on our blog, IG, or as a Brand Ambassador.
www.BeautyntheCity.com
GIVEAWAY
Readers can enter to win the Beauty and the City Chapter Magazine Contest Here: https://contest.beautynthecity.com/128491