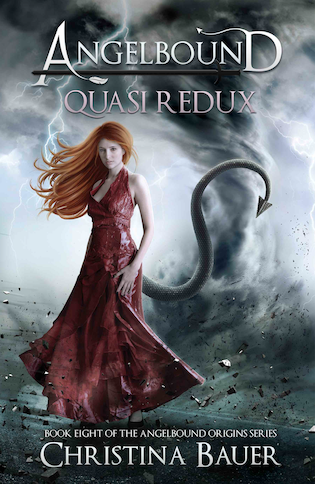 “Myla is a magnificent heroine, fierce and outspoken, hilarious and mischievous … And did I mention that her demon tail is sentient? Best. Sidekick. Ever.” – The Nocturnal Library

Myla Lewis has her life back. Wife. Mother. Queen. Great Scala. Queen of the Thrax. Yay! Then one day, Myla runs across a supernatural waterfall that makes her igni screech like crazy. Our heroine speaks the fateful words, “Some days, I wish I weren’t the Great Scala.”

The waterfall grants her wish.

A moment later, Myla is back at Purgatory High. No husband. No child. No powers beyond her old quasi days. And without Myla around as the Great Scala, all quasis now live under Armageddon’s rule. That sucks. Hard. So Myla sneaks into Antrum—she simply must find Lincoln and figure this out. Once she arrives, two problems arise.

First, her husband doesn’t know her. At all.

Second, Lincoln is married to someone else.

Thank you so much for answering my questions Christina!

Can you start by telling us a few things about this new and exciting chapter in the Angelbound series? I absolutely loved the cover!

In QUASI REDUX, Myla gets caught up in some magical trouble. Namely, her world resets so she never was the Great Scala. Instead, Myla finds herself back at Purgatory High. Even worse, Lincoln is married to someone else! It’s a hoot.

Let’s talk about Myla… How has her character evolved since Angelbound?

Myla’s grown up in a lot of ways. For instance, she’s learned to work with other people, deal with losing her son and much more. That said, in other aspects, she’s still the same person. People sometimes critique that no grown woman would act like Myla. I’m like, I’m exactly like her in a lot of ways… and I’m 50… and it’s a blast!

I started outlining this a year ago and have been straight out writing 24-7 for the last three months.

What was the hardest part of writing Quasi Redux?

There was so much I had to cut. I could have done a whole book on Myla meeting her mother and what happened to Camilla without her daughter. In the end, I had to focus on Myla and Lincoln. It’s really their love story reborn.

Was there a moment that you said, "I give up"?

Often! I also have a time with every book where I think, this is it. I’ve jumped the shark.

Your area of expertise is Young Adult books. What do you like most about writing for this age group?

I’m big on myths, and there’s a reason the stories that really resonate and have staying power are set with young adults. It’s about reinventing yourself, not being a certain age. Changing lives for the better through storytelling--that’s what motivates me to write.

You’ve written a number of books so you should be accustomed to seeing your books in bookstores. How do you feel every time a book of yours is out for sale?

It’s always a thrill! And I ask the seller their opinion before buying my own books, just to see what they’ll say.

According to your Goodreads profile, after Quasi Redux, we can expect Aquila. Is that going to be the end for the Angelbound Origins series and Myla’s story?

Oops! I need to update that. The next story after QUASI REDUX is called CLOCKWORK IGNI. It’s a mash-up of steampunk and Ancient Egypt where Myla’s igni go berserk on her. After that, I have outlined LADY REAPER, where Myla meets the Grim Reaper, who happens to be both a female and super evil. After-after that, I’ve one called ANGRY GODS, where Myla goes up against the deities of ancient Greece and Rome. So no sign of stopping Myla’s stories yet!

Do you have anything specific that you want to say to your readers?

Thank you! When I get down, I read your reviews and then get back to work. I truly appreciate your support.

Thank you for taking the time to answer the questions!!

Christina Bauer knows how to tell stories about kick-ass women. In her best selling Angelbound series, the heroine is a part-demon girl who loves to fight in Purgatory’s Arena and falls in love with a part-angel prince. This young adult best seller has driven more than 500,000 ebook downloads and 9,000 reviews on Goodreads and retailers. The first three books in the series are now available as audiobooks on Audible and iTunes.

Bauer has also told the story of the Women’s March on Washington by leading PR efforts for the Massachusetts Chapter. Her pre-event press release—the only one sent out on a major wire service—resulted in more than 19,000 global impressions and redistribution by over 350 different media entities including the Associated Press.

Christina graduated from Syracuse University’s Newhouse School with BA’s in English along with Television, Radio, and Film Production. She lives in Newton, MA with her husband, son, and semi-insane golden retriever, Ruby.