Welcome to my stop on the blog tour for The Hunt for the Legendary Mr. Morris by Sasha Boileau! 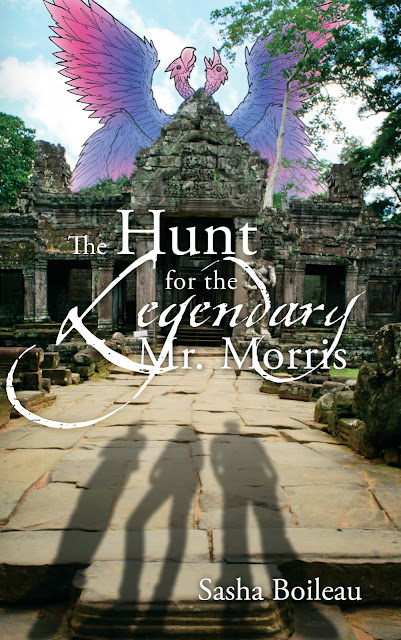 Author:  Sasha Boileau
Title: The Hunt for the Legendary Mr. Morris
Genre: YA Sci-Fi/Action & Adventure
Release Date: September 14th 2020
Summary
It may not be the end of the world, but if they fail it will definitely be the end of them.

What’s left of the human race live a life of ignorant luxury thousands of years after the war. That is until Kade, Brodin, and Sylas set off a chain of events they never thought possible. What do all three have in common? They are all skinny, they don’t believe a single thing they are told, and they love to delve into forbidden waters.  They find themselves trapped in the world they dreamed of, left with a task where failure is not an option, and time is ticking down.

Kade and his friends must find the only man able to fix the mess they caused, but how will they survive a world where they are nothing but a delicacy of the food chain? The weight of humanity is resting on their tired shoulders with only each other to rely on.

Sometimes, I get a bit disoriented if I think about it too long. I wonder if it’s night sometimes. In the living pods, the light changes throughout the day, brighter when I wake up to symbolise the mornings of old and dimmer as the day goes on. It’s a basic concept but what makes me dizzy is thinking so hard about things I shouldn’t. Is it really like that outside? Is it the same timing? The same feeling? How do they know? Is there some secret society that goes out and checks? The craziest thing of all is that it’s right there, right outside the uncomfortable lights of this pod. I can place my hand on the surface that separates my world and...whatever world my world is stuck inside of.

About the Author
Sasha Boileau was born in 1999 and lives in Midland, Michigan. Sasha has expressed that publishing her work has been one of her greatest achievements as they hold many messages and lessons; Sasha hopes her writing can help her readers while also providing an entertaining story. Sasha currently attends college with aspirations of becoming an English teacher and bettering herself as an author.
Facebook Instagram  Twitter
GIVEAWAY
a Rafflecopter giveaway
Αναρτήθηκε από Anastasia Gkaitatzi στις 00:05