Check out my stop on the blog tour for The Return (Sanshlian #3) by Dani Hoots, out June 16th! 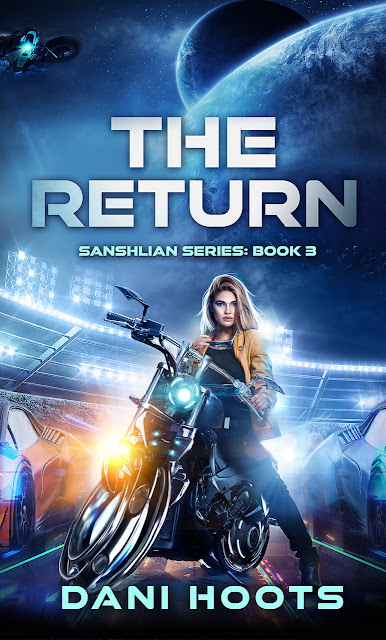 Everything is riding on the races.
As planned, I have entered the races to get back the map to Sanshli. Everything is riding on this and I cannot lose. Torn between my brother, Nygard, and Jack, I didn’t know who to trust. The more I thought about it, the more I wondered if Nygard had it right—maybe we were more powerful and deserved to rule. Only time would tell, and the winner of the races would be able to find Sanshli and end this once and for all.
This is the conclusion of the Sanshlian Series

Purchase your copy of The Return HERE! 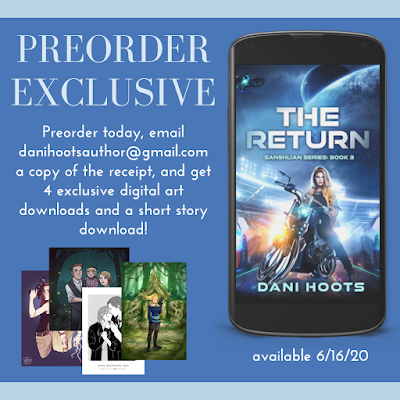 Previous Books in the Series 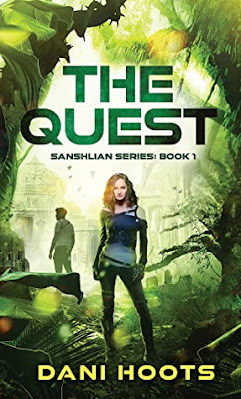 Eleven years ago, my life was ripped away from me. My father, my brother, my humanity. Everything. I was thrown into the Kamps, created to be a mindless machine. But I fought against it, not letting them take away my memories of the past.

It has been seven years since I was taken out of the Kamps and made into the Emperor's Shadow. Now I only take orders from him, and him alone, without questions. That is, until my brother, who I thought was dead, shows up and kidnaps me in order to help him find some long lost planetthat our father used to tell stories about.

According to the legend, and who finds the planet Sanshll can rewrite the past, and my brother wants to use it to destroy the Empire. My loyalty will always be to the Emperor. But what if this planet is real? The longer I stay with my brother, the more I begin to find that the Emperor has been keeping secrets from me. But I can't turn my back on him... 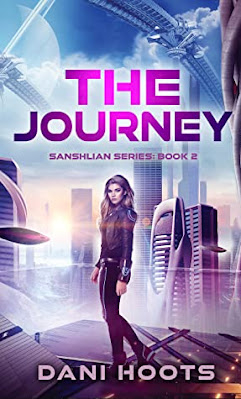 Now it is time to figure out who I really am.

A year has passed since we were all on Sanshli. My idiot brother decided to pull out the sword and now we were stuck in the past, all in new bodies. Like my life wasn't complicated enough.

But now it was going to get even more complicated.

Time was running out and I had to finish my mission: destroy Nygard once and for all. I knew I would be on my own for this one, as I was the only one who I could trust. And there was always Jack, but I still didn't know where he was. Hopefully it would all make sense soon.

But what were the odds of that?

These guys were amateurs.
I glanced back in my rearview mirror to see the next contestant barely making it around the corner a couple hundred meters behind me. I licked my lips and smiled. This was way too easy—I could get used to a life like this.
The sad part for these guys, I had just learned to drive. I was new to this, and I was still beating them. No wonder the Emperor thought it would be a good idea for me to enter this contest—he had faith I would figure it out.
Taking a deep breath, I tried not to think of what this was really about. I couldn't let my current victory cloud my judgment, as there was a lot at stake here. Although, if I still got second or third in this last race, I would still get first place overall, as my points were exceeding everyone else. But I knew if I let them get near me, someone would try to sabotage my car. I was too good for them, which caused them to resort to illegal tactics.
But that was Recar for you. Legal means accomplished nothing here.
Which was where I came in.
This was my first mission on my own that the Emperor had assigned me. After years of training, I was ready, although I felt I had been ready for awhile now. The mission was to get close to the leader of Recar, Jack McHannon, and assassinate him, as he was causing some trouble for the Pandronan
The reason I had to compete in this race, however, was because there was no good way to get close to Jack. He was heavily guarded. However, if I won this race I could become his personal driver. Then I could kill him.
Easy as that.
The Emperor had trained me to stay incognito, but this mission was proving to make that a strenuous task. I was the youngest person to compete, and it was technically against the rules. However, rules didn't matter here, but it was gaining a lot of press and although I tried my best to stay away from cameras by keeping my helmet on as much as possible, those sneaky journalists followed me everywhere and snapped a few pictures. Now everyone knew what I looked like.
I guess I would just be that face everyone feared.
No one knew who I was, but that would change soon. I was the Emperor's Shadow—the person that would be getting the dirty things done. I was to crush any resistance throughout the galaxy. It was what the Emperor trained me to do.
And I didn't have a choice.
I would have been dead if the Emperor didn't find me and adopt me, so to speak. I had tried to kill him a few times, yet he still took me under his wing. Why that was, I did not understand. I tried to bring it up multiple times, but he always ignored the question. I gave up asking him and just accepted my fate—I was his tool.
"Bitch, you better not win this! You aren't even old enough to race! I'm going to—"
I clicked off the radio. Great, they tapped into my car komlink that was only supposed to be used by me and the race coordinators in case there were any hazards or reasons to stop the race. If the man was smart, he would have pretended he was one of the coordinators and created a fake hazard so I would slow down and he could pass me. But instead, as all men like to do, he just threatened me.
I swerved a little right, barely clearing the corner. I needed to keep my mind focused on the race and stop thinking about how stupid people were, and about my past. It was what moved me forward, however, as I had learned to look out for myself and myself only. I didn't trust anyone—I didn't need to. All I needed was myself and I would do anything to keep it that way. I hated working with the Emperor’s other generals, as they all wanted to see me fall. They seemed to be jealous of the way the Emperor treated me, although I wasn't sure why. His attention didn't mean I was living a splendid life, it just meant I had more at stake.
Which was why I couldn't mess this up.

Dani Hoots is a science fiction, fantasy, romance, and young adult author who loves anything with a story. She has a B.S. in Anthropology, a Masters of Urban and Environmental Planning, a Certificate in Novel Writing from Arizona State University, and a BS in Herbal Science from Bastyr University.

Her hobbies include reading, watching anime, cooking, studying different languages, wire walking, hula hoop, and working with plants. She is also an herbalist and sells her concoctions on FoxCraft Apothecary. She lives in Phoenix with her husband and visits Seattle often.

Email ThisBlogThis!Share to TwitterShare to FacebookShare to Pinterest
Ετικέτες #Giveaway, Blog Tour, Dani Hoots, The Journey, The Quest, The Return