Check out my stop on the blog tour for Prodigal by Samantha Sanchez! 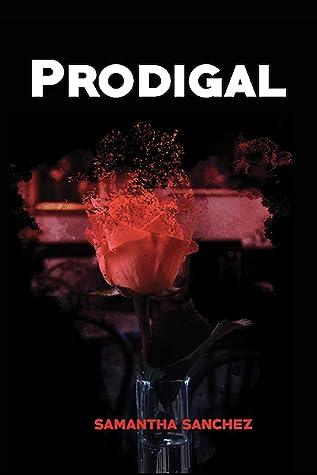 “There was a voice in my head that told me to walk away, let it go and another voice tellin me that all I’d ever done was walk away and people never stopped…..‘Your name is Lyric and you can’t let this slide anymore, he needs to learn what happens when you come disrespectful. Last night wasn’t enough. It’s time to teach him and everyone else that you not the one to play with.’

Lyric is 21 years old and bored with the inhibited lifestyle of endless church activities she’s been forced to participate in since childhood. Harboring insecurities about her weight and beauty she is elated when she is cast in a reality show and moves in with five strangers under the premise of pursuing further education. However, a surprise pregnancy causes her life to take an unexpected turn. The additional weight and the disregard from the child’s father, cause her insecurities to deepen as her pains and humiliation are documented for everyone to see. The show becomes a hit and she a star but now she has to find a way not to let the pain she feels destroy her heart and poison her soul.

Purchase Links can be found HERE!
The follow up to Prodigal, Lyrical Chaos, will be released around Labor Day!

New Years Eve came and my mom was at church for watch night service. I chose to stay home. Watch night service was too long for me and too boring. I’d been to plenty in my lifetime to know that it’s not how I wanted to spend my New Years Eve. I had ran a bath and was about to step in when my door bell rang. No phone call, no text, no warning, just “Surprise.”

“Who is it?” I yelled walking up to the door wearing the Biggie Smalls T-shirt that Anthony had given me to wear on Thanksgiving. I never gave it back because I liked it ,I liked wearing men’s oversized T-shirts. They’re roomier than regular Tees, plus it hid my ever expanding stomach. So I felt sexy.

“It’s me Ric, open the door.” DeVon said from the outside. I groaned and unlocked the door and when I opened it, of course, he wasn’t alone. Anthony was standing behind him.
“Hey. Happy New Year ‘Ric. Anthony needs a place to stay.” DeVon said in one breath walking in past me. Anthony followed suit.
“What?”

“Is that my shirt?” Anthony asked

“How are you homeless? You just said you were getting a spot.” “Not happenin’.” He said cooly “That is my shirt” “Why isn’t it happening?”

“The manager at this one place I looked at yesterday was trippin’. I think he’s racist. I’ve been lookin for that shirt too. Hey, what else do you have of mine? Cuz I’m missing some stuff. He put his bag down and went further into my house in search of my bedroom. “No! Stop!” I shouted . I turned on DeVon “What the hell is going on?!”

“Anthony needs a place to crash, until he gets his own place.” DeVon explained or until next semester starts and we move back into the clubhouse.”

“He’s not staying here.” I insisted “Why can’t he stay with you?” “Hey! Are these my basketball shorts?” “Anthony!” I shouted “Get OUT of my room!”

“DeVon I don’t want him staying here. Let him stay with you.”

“I got into an argument with my step dad and my mom’s kicked me out.”

“So then get a hotel. You can afford it.” I called out to Anthony. I walked down the hall DeVon in tow to find Anthony with his shoes off on my bed watchin TV “You not stayin’ here.” I told him knocking his feet off of my bed.

“Yes I am.” he said in a dismissive tone and put his feet back up.

Why weren’t either of these dudes listening to me?

“Ima stay at Athena’s I’m just dropping him off.” “Then take him with you there!” I pleaded “There’s not enough room. It’s just a studio.” “He’s gotta go somewhere. He can’t stay here.”

“He’s your baby daddy.” DeVon laughed “Don’t be like that.”

“No. You gon have to go back to yo aunt’s in long beach or one of your cousin’s. Get a hotel.” I said turning to Anthony
“I can’t.”

“My aunt won’t let me, my cousin’s girl don’t like me and why would I get a hotel that’s what you for and I don’t have any more money left anyway.”
“How do you NOT have money left for a hotel?”

“We haven’t gotten paid for the rest of the episodes yet.”

“We got the first 3 and the advance for season 2, what happened to all that?” “Christmas presents for my family and stuff and I haven’t cashed my advance yet.” “You have nothing left over from the restaurant all semester?” “Nope.”

“He fell in love with a stripper like Akon did.” DeVon chuckled “What?!”
“Ya’ll females are expensive. Hey what you got to eat?”Anthony asked “Can you make me something to eat? Please? Thank you.”

“I am not taking care of him!” I said to DeVon. “Go stay with the stripper!” I yelled back at Anthony

“That’s his problem”
“Stop being mean. Ya’ll finna live together anyway when you film your spin-off.” “No we’re not because I didn’t agree to the spin off.” “You will.” Anthony predicted

“Ok, good. Alright, I’m gonna go back to Athena’s I’ll see ya’ll”. He walked out of my bedroom and I followed him.
“DeVon, take him with you, he can’t stay here.”

“Bye! Have fun!” He laughed

“DeVon!” I stomped my foot crying in frustration “No!” he walked out and shut the door behind him leaving me and Anthony alone.
“Hey can you bring me my bag?” Anthony asked.

I felt so helpless. I wanted a drink so bad but the solid mass protruding from my stomach prevented me from doing so. How do I get railroaded in my own home? We were on hiatus. I’m supposed to have six weeks before I have to deal with him again. It was bad enough that I wouldn’t be able to escape him next year or any year after that, if he planned on being around for his child, although I get the feeling he’s one of those guys that will talk about being in his child’s life but will be inconsistent about it. However, the six weeks between the end of fall semester and the beginning of spring were supposed to be just for me. To regroup, to relax ,to wind down from all the drama of living in the clubhouse and to brace myself for the next wave. If I wasn’t contractually obligated to go back for season 2 and if I didn’t need the money, I wouldn’t even go back to the drama. I walked back into my bedroom crying, wishing I could reason with Anthony but knowing what I wanted never actually mattered when he needed something.
“Why are you crying?” Anthony asked “Relax.”

“ Get off of my bed!” I yelled. He didn’t move. I grabbed his ear tight digging my

fingernails into the part that attached to his skull and pulled. “I TOLD YOU TO GET OFF OF

MY BED!” I yelled. “GET OUT OF MY HOUSE! YOU ARE NOT STAYING HERE! THIS IS MY PERSONAL SPACE! YOU CANNOT BE HERE! I DO NOT WANT YOU HERE!”


“Ahh!” He cried out swinging his feet over the edge of my bed and I let go when he stood

“Calm down. Come here.” He grabbed me by my waist and pulled me to him. “I been thinking...we should start our arrangement again.”
“No.” I said trying to push his hands away “You don’t want me, remember?”

“I wouldn’t be here if I didn’t.” he put his hands on my bottom and tried to kiss me but i turned my face and moved his hands
“You’re so full of s--t. You’re only here because you have no place else to stay.” I reminded him.
“No, not just that. I could go to Long Beach if I had to. I wanted to be here. I missed you.” He tried to kiss me again but I turned my face again.
“What part of ‘No’ don’t you get? You cannot live here.” And it wasn’t fair for him to be playing with my feelings. He missed me right now but soon he wouldn’t. As soon as I gave in or even if I didn’t, his attentions would wander and I’d no longer be enough.

“Just let me stay tonight then. Tomorrow if you still want me to, I’ll catch the greyhound to Long Beach.” I felt so defenseless and weak. The heaviness in my heart deepened.
“Ugh! Whatever! You’re sleeping in the living room. There’s a blanket and pillow in the hall closet.” I walked away and into the bathroom slamming the door behind me. My mom would be home soon and she was not gonna like him being here. Yes it was technically my house, I paid for it but, as a licensed minister it would look bad to allow her pregnant unwed daughter’s non boyfriend to stay in the house she lived in. It would already be bad enough when the show aired and everyone found out the details of my situation, but I couldn’t let him sleep on the street either. I wasn’t that cold hearted.

This was going to keep happening I already knew it. Baby or not. The fact that Anthony and I had a very public sexual relationship, past or present, has condemned me to be stuck in this cycle with him and I really didn’t know how to stop it. Clearly. “No” didn’t mean a thing. I slid down in the hot bath, as hot as was medically acceptable to keep the baby from going into distress, and really cried. Not the weak simpering tears of frustration but sobs of hopelessness and emptiness. He was never going to care about me. I don’t even know why I wanted him to so much. Either way we’re permanently linked because of one stupid night.

I am 33 years old I have an associates degree in psychology and liberal arts with a focus in social and behavioral science will be starting film school this summer. I was born and raised in San Diego, California. I've been writing since I was 12 years old but Prodigal is my first book ever completed.
My website is www.samanthasanchez.net