Missed connections and might-have-beens are great romance novel fodder. Summer romances and flings? Even better! Let me tell you about one of the best pick-up lines I have ever had the good fortune to receive.
The summer of 1995 was a scorcher. Temperatures in the mid-to-upper 90s and high humidity. So, naturally, I elected to spend the hottest two weeks of it at a campground in Pennsylvania, wearing layers of medieval garb.

Every August, the Society for Creative Anachronism (SCA), a medieval recreation group, hosts a mock tournament and war called the Pennsic War. 1995 was the first, and alas only, year I was able to attend. In addition to battles and all other things medieval and military, there are medieval arts and crafts (my favorites were music and dance) and lots of partying.

The year I was there, there were also—and this is the important part—two swimming areas. One was designated the family swimming hole, the other, the classic swimming hole. I’m not sure why it was a classic, but I do know this: it was clothing-optional.

Did I mention it was hot that year? And that I was in layers of heavy cotton and linen? Being young and impetuous, when my friends said they were going swimming at the classic swimming hole, I decided to go along. It took all my courage to shuck my skirt and my bodice and my chemise and my underwear and go wading into the water. Which felt, by the way, like absolute heaven.

So there I was, in water up to my shoulders, when up walks (swims?) an absolutely gorgeous man. Green eyes, curly brown hair, nice smile. We started chatting (okay, I was flirting), and he suddenly says, “You have the most amazing blue eyes.”

As is my usual MO when someone I’m flirting with starts flirting back, I panicked. To this day I don’t know how I managed to keep from ducking under the water and running away.

He said his name was Taran, and he was from (alas again) Seattle. We promised to meet up later that night for dancing at the barn. As he was leaving, one of my friends leaned over and said, “You’re standing naked in front of him, and he compliments your eyes. Now that’s a gentleman!”

Even better, when we found each other at dancing that night, the first thing he blurted was, “You look different with your clothes on!” (And he was, to my delight, a fantastic dance partner.)

Well, with him in Seattle and me in Michigan, it could never be anything more than a Pennsic flirtation. We promised to email, but neither of us really did. That was twenty years ago now (!), and I’ve never forgotten him. In these days of Facebook, you’d think I’d try to look him up, but for one thing: SCA members commonly have a medieval name they go by rather than their modern real names. I never learned Taran’s real name, and he never learned mine. My own real-life missed connection.

In my upcoming book, As Lost As I Get, itinerant doctor Zoe Rodriguez and CIA operative Lee Wheeler have a very different sort of missed connection. They meet when he’s sent in to rescue her from kidnappers in Mexico, and there’s no time for romance. After spending two years apart thinking of each other, they get a second chance in a remote corner of Colombia. Of course, second chances are never simple, especially not when both of them have jobs that put them in the center of danger.

Despite the danger, they find the time to reconnect. And thanks to the heat, they manage to find time for a little skinny-dipping of their own.

I had a blast writing their story—I hope you’ll enjoy it. And Taran: if you’re out there reading this, Facebook me! 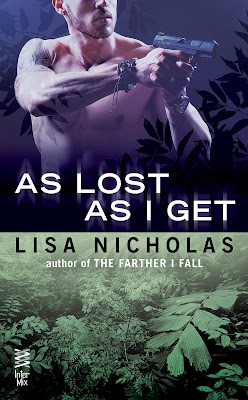 Purchase As Lost As I Get on


Lisa Nicholas is the author of The Farther I Fall and As Lost As I Get. If she’s not writing, she’s feeding her story addiction any way she can: raiding Netflix, pillaging her local bookstore and library, and (most recently) tearing her way through the comics archive at Marvel.

Lia: Thank you for chatting with me.
Sable: Our pleasure.
Ana: It’s always nice talking with you.

Lia: So our topic today is pick up lines. Do shifters use them?
Sable: * rolls eyes * Yes, I’m afraid so.
Ana: But it’s different with age. The teens to young adults are still in the shy stage, well most of them anyway.
Sable: Yes, while the adult males are all “I’m your mate, accept it” * she spoke in a deep, mocking tone *

Lia: * laughs * What are of the funniest or craziest ones you’ve heard?
Ana: Oh I have one. A young wolf, who was trying to get out of trouble by flirting with me, had said, “You make my wolf purr. How about a little bite?”
Sable: * laughed so hard she nearly fell out of her chair. * That was lame. Let me guess, it was Cody?
Ana: Yes. * she frowns * I miss that pain in the ass.
Sable: * takes her hand * He’s in a place as is all the children from Onxy. That is the ones I could save.

Lia: What the adult males? Are any smarter when it comes to dating?
Sable: Nope. They’re clueless. I heard a couple of bad ones. “Baby, I’d like be the cream you lap up on all fours.” and “You and I go together like a wolf and his bone.”
Ana: Oh man, those are awful. Why don’t males just straight out ask for a date instead of trying to impress us with their bad choice of pick up lines?
Lia: I don’t know. But if they didn’t use them, then we would have as much stuff to pick on them about.
Sable and Ana together: So true.

Lia: It was great talking with you. We’ll have to do it again soon.
Ana: Yes, we do.
Sable: Your welcome.

Just for fun, make up your own shifter pickup lines and post them in the comments. I hope everyone has a wonderful summer! 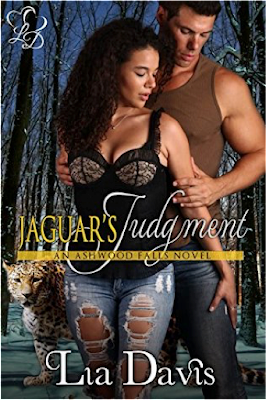 Sable Darwin has run from her destiny for too long. Stepping away from her role as Beta of the Onyx Pack, she chooses to take her chances and face judgment for her crimes. Her only hope for survival is to trust the male who ripped her heart out and turned his back on her so many years before.

Jared Nickels’ only loyalty is to the Alphas of Ashwood Falls. When he sees Sable again after fifteen years, he can’t stop himself from touching her. Through his Justice gift to see others’ pasts, he learns she’s not as guilty as he’d assumed. She’s actually one of the biggest victims in the war that her parents started.

When the war shifts in favor of the enemy, Sable and Jared must band together to put an end to the threat. Or die trying.

Author Bio
Lia Davis is a mother to two young adults and three equally special kitties, a wife to her soul mate, and a lover of romance. She and her family live in Northeast Florida battling hurricanes and very humid summers. But it’s her home and she loves it!

An accounting major, Lia has always been a dreamer with a very active imagination. The wheels in her head never stop. She ventured into the world of writing and publishing in 2008 and loves it more than she imagined. Writing is stress reliever that allows her to go off in her corner of the house and enter into another world that she created, leaving real life where it belongs.
Her favorite things are spending time with family, traveling, reading, writing, chocolate, coffee, nature and hanging out with her kitties.

Are you ready to enter-to-win? Follow the giveaway stops for your chance to win one of these amazing prizes here: Summertime eReader Giveaway!