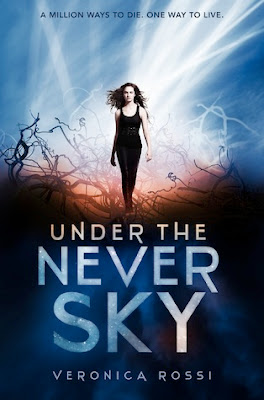 Meet Aria. She lives in Reverie. She has her friends but her mother works as a doctor in Bliss. Suddenly one day she goes missing and Aria does whatever she can to contact her mother. Even risk her life. Then Peregrine, an Outsider, saves her life one, two and even three times. Her world changes in a heartbeat and she’s stuck with Perry. But during their trip to find her mother,   they come across enemies, friends, Cinder a boy with a special ability, the truth about Aria’s father and a desire like no other.

“He kissed her slowly. Everything went slowly so he could follow her temper, and search into her eyes. When they joined, her scent was brave and strong and certain. Perry took it into himself, breathing her breath, feeling what she felt. He'd never known anything as right.”

You will fell in love this book as Aria and Peregrine fell in love with each other. We are introduced to Perry’s family: Vale his brother and Blood Lord of the Tides, Talon his nephew who is kidnapped for medical reasons and the reason Perry and Aria met, Roar his friend and Liv his sister.

“Roar leaned across the table and smiled at her seductively, his dark hair falling into his eyes. 'When you say everything happens in the Realms, do you mean everything?'
Aria laughed nervously. 'Yes. Especially that. There are no risks in the Realms.'
Roar's smile widened. 'You simply think it and it happens? And it actually feels real?'
'Why are we talking about this?'
'I need a Smarteye,' he said.”

During the book, you will understand that Aria is too precious to die. Her mother doesn’t make it but she leaves Aria behind who is revealed to be….you have to read it ;)

An amazing must read for dystopian lovers.

Here is the Goodreads synopsis:

DESTINY BROUGHT THEM TOGETHER.

Aria has lived her whole life in the protected dome of Reverie. Her entire world confined to its spaces, she's never thought to dream of what lies beyond its doors. So when her mother goes missing, Aria knows her chances of surviving in the outer wasteland long enough to find her are slim.

Then Aria meets an outsider named Perry. He's searching for someone too. He's also wild - a savage - but might be her best hope at staying alive.

If they can survive, they are each other's best hope for finding answers.