I am thrilled to be hosting a spot on the THE HORROR FILM KILLER by Michael J. Bowler Blog Tour hosted by Rockstar Book Tours. Check out my post and make sure to enter the giveaway! 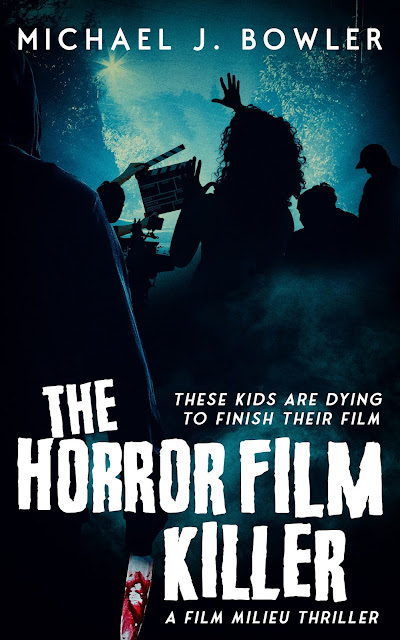 Pre-Order The eBook now for 99 cents!

What would you do if someone acted out—for real— the kill scenes from your student-made horror film?

That’s the dilemma facing high school seniors Cassie and Donovan. Best friends, aspiring filmmakers, and hopeful romantic partners, they set out to complete a feature-length horror film as a graduation project for their performing arts high school. Using actors and crew from among their classmates, they aim to finish the bulk of shooting over Spring Break. When several murders occur not far from their locations—each one recreating a specific “kill” scene from their script—they suddenly find themselves embroiled in a real-life horror movie neither of them bargained for.

Cassie’s police officer dad and his ex-girlfriend—a homicide detective Cassie once hoped would be her stepmom—allow the film shoot to continue because the killer has threatened to murder Donovan’s mother if they stop. Traps are set and arrests are made, but the killer—who might be a member of the cast or crew—is one step ahead of their every move.

Can Cassie and Donovan help the police unmask the psychopath before more people die?

Needless to say, while writing The Horror Film Killer, I listened to music from horror movies. Big shock there, huh? The plot of the book involves teens making a horror film in which they pay homage to kill scenes from classic horror films, so the music I chose to accompany the writing of the book partially came from some of those movies, but also from others that added a more human element to my story.

All these scores created mood and atmosphere in my mind as I wrote, but the softer themes, the character themes kept me rooted in what makes any story work – the characters. Silver Bullet and Burnt Offerings have soft, melodic themes for some of the characters in those films and these themes helped keep me grounded in my own characters while writing. The music from Halloween remains one of my favorite soundtracks ever and I never tire of listening to it. All the themes create a mood of dread and outright fear. It is, in my opinion, John Carpenter’s best musical score.

Check out some of these scores, if film music is of interest to you, and please give a look-see to The Horror Film Killer.

Michael J. Bowler is an award-winning author who grew up in Northern California. He majored in English/Theatre at Santa Clara University, earned a master’s in film production from Loyola Marymount University, a teaching credential in English from LMU, and a master’s in Special Education from Cal State University Dominguez Hills. Michael taught high school in Hawthorne, California for many years, both in general education and students with disabilities. When Michael is not writing you can find him volunteering as a youth mentor with the Big Brothers Big Sisters program, volunteering within the juvenile justice system in Los Angeles, or caring for his newly adopted son. He is a passionate advocate for the fair treatment of children and teens in California, and hopes his books can show young people they are not alone in their struggles.

1 winner will win a signed finished copy of THE HORROR FILM KILLER, US Only.

3 winners will win an eBook of THE HORROR FILM KILLER, International.