I am thrilled to be hosting a spot on the EREBUS DAWNING by A.J. Super Blog Tour hosted by Rockstar Book Tours. Check out my post and make sure to enter the giveaway! 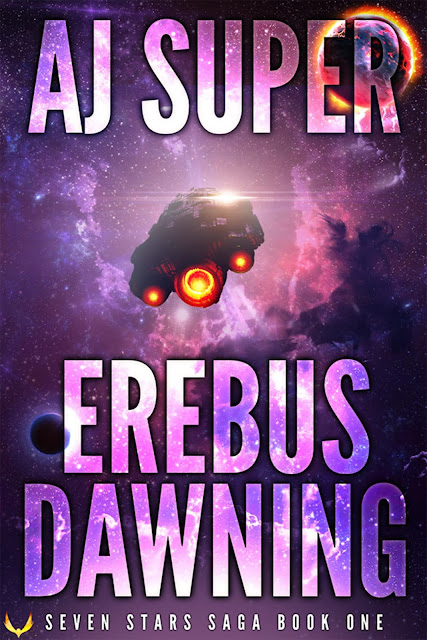 Read for FREE with a Kindle Unlimited Membership!

“Those who can destroy a world can control the universe.”

Everyone wants the Star of Erebus. Space-pirate Nyx Marcus is no exception. With it, she can prove to her father that she is worthy of his legacy. But she’s come up empty-handed aboard the space-ship Thanatos and now Malcam, her father’s First Officer, is mutinying. As Nyx flees with a loyal skeleton crew, she discovers that the planet-killing weapon, named after one of the seven gods, is more than what it seems. Erebus isn’t a simple weapon, but an ancient AI and a technological god.

With the oppressive Queen of the Protectorate and new pirate captain Malcam searching for the Thanatos and Erebus, the AI god has more surprises for Nyx. Waking dormant AI code in Nyx’s blood, Erebus reveals they are family and Nyx is the head of the Seven Stars pantheon. But while Nyx’s only choice is to protect Erebus, she wants no part of her AI responsibilities. Now Nyx must learn to control her power without sacrificing her own humanity or give her enemies a new way to oppress the known universe and lose the family she holds dear. 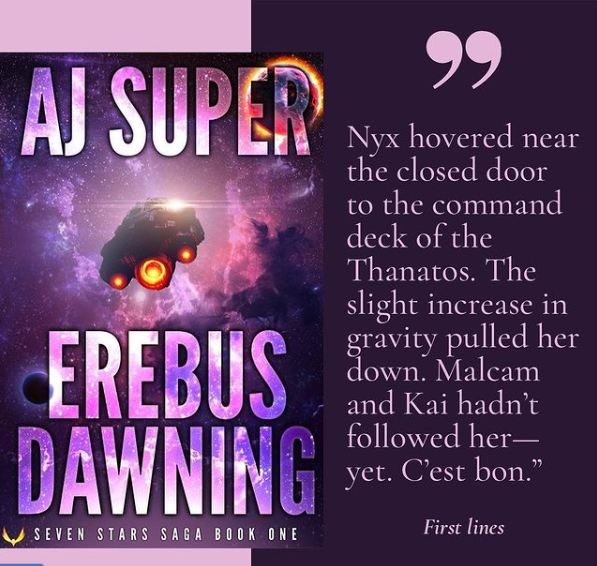 “By rights, the Medusa and her crew is mine, Malcam. You know that,” Kai huffed, puffing up his chest.

Malcam sneered at Kai. “But you’re not here, and I’m in command. It’s not my fault the captain slipped and fell out of an airlock while you were gone.”

Nyx paused, hand hovering above her console. Did she hear Malcam right?

Kai turned to her.

Malcam’s cerulean gaze crossed from Kai to where Nyx was standing. “Did you not get a chance to tell her?”

Nyx sank next to the console. Her breath stuttered. Her father…was gone? He couldn’t be. He was the last of her blood. The last of her family. Now he was floating in the cold black of space. Dead.

“That’s the way the Medusa works, isn’t it? The strong rise to the top. The weak end up in the black. That’s the way it’s always been. And frankly, his decision to elevate you above me, and to give that princess of his rank after the debacle over the Star—that was weakness. You don’t show weakness on this ship.” Malcam ground his teeth. “Now, do you surrender? Or do we fight this one out? Please say the latter. I’m itching for a fight.” He snickered.

A lump formed in Nyx’s throat that she couldn’t swallow. Tears burned her eyes. Her father. He may not have been the good guy of her story, but there were quiet nights playing chess, bouncing red balls in his office when she was a child, and many late dinners together so the crew wouldn’t know. The tears shattered down her cheeks into tiny sobs.

Malcam had taken advantage of Kai having most of his loyal people on the Thanatos. She shuddered. The people left on the Medusa who supported Kai and her father would be executed. Malcam had enough supporters to overturn her father, who was, if not fair, at least seen as just according to traditions, except when it came to her.

Her heart threatened to beat from her chest. Nyx didn’t even get the chance to tell him about the Star or prove that she was smart enough and worthy to receive the ExO rank. She sucked her breath in fits. Her father was in the black. She stood up and faced the video screen. “Fils de pute. I’m going to kill you, Malcam.” The words bubbled from her gut and rumbled in her chest. If she ever came face-to-face with him again, she would end him.

Angela Super earned two Bachelors' degrees from the University of Idaho in the Creative Writing and Theater programs. She has been an author since she was old enough to write (and illustrate) a stapled-together ABC book, which she still has packed away in a box of childhood memorabilia. Currently, she lives in Kansas with her husband who is a High School Graphic Arts Teacher and two fuzz-brained kittiots. She loves to make costumes, cosplay, and occasionally she plays D&D or MTG with teacher-friends during summer vacation.

Angela is inspired by Ursula K. LeGuin’s The Dispossessed and her two feisty grandmas, and she devours sci-fi and fantasy in every medium. She is an active member of the Twitter writing community, and also works with several amazing writing groups, frequently getting to read and critique wonderful unpublished work.