Check out my stop on the blog tour for Sting by Cindy R. Wilson from Entangled Teen! 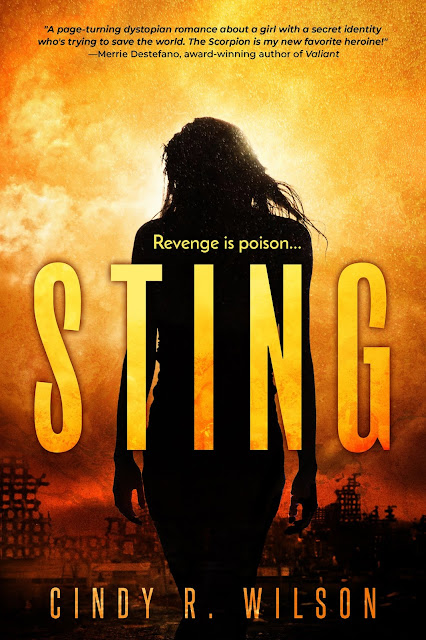 They call me the Scorpion because they don’t know who I really am. All they know is that someone is stealing from people with excess to help people with nothing survive another day.But then a trusted friend reveals who I am―“just” Tessa, “just” a girl―and sends me straight into the arms of the law. All those people I helped…couldn’t help me when I needed it.In prison, I find an unlikely ally in Pike, who would have been my enemy on the outside. He represents everything I’m against. Luxury. Excess. The world immediately falling for his gorgeous smile. How he ended up in the dirty cell next to mine is a mystery, but he wants out as much as I do. Together, we have a real chance at escape.

With the sting of betrayal still fresh, Pike and I will seek revenge on those who wronged us. But uncovering all their secrets might turn deadly…

He empties another pot of water. “How did you learn how to do all this?”
“Unclog sinks?”
“Fix things. They said the Scorpion built robots the size of men and sent giant tanks into those warehouses to collect all the supplies.”
“Giant tanks?”
“With electronic devices attached to the side. Weapons.”
I stare at him.
“What?” he asks.
“Giant tanks and human-sized robots? Really? That’s a lot of embellishment.”
I wish I could have built an army of robots, though. Something to fight back against the Enforcers. But we still have a chance. Me and Pike. We’re going to do this together.
“You made a big impact, Tessa.”
I look over, my hands dripping with sink water. He’s never called me Tessa before. I almost forgot he knows my real name.
His eyes are earnest, focused on mine. “Whether you were building robots or not, you made a difference. People talk when that happens.”
Mongo snaps out an order for us to get to work. I drop my eyes and continue to gather pots of water.
“I made robots,” I admit with a shrug.
Pike flashes a smile. “Yeah?”
“Robotic scorpions to help canvas the city and the areas we planned on…visiting.”
“Ah. Scorpion. I see. I was wondering where that came from.”
“It wasn’t my idea to start calling myself that.”
“Like I said, you made a difference.” He shifts another pot of water to the bucket. “People need heroes and hope to hold onto. When they get it, they do a lot more than embellish. They start to believe.”
I make myself continue working, though my heart is clutching at Pike’s words. I know what he’s talking about. I know about hope and believing. The first time we brought back supplies for the people in the Dark District and they thanked us, I believed we could do more. The first time a mother cried because we gave her food for her kids, I believed we could get into any warehouse anywhere and help more people. I had hope and I believed.

Cindy lives at the foothills of the Rocky Mountains, and loves using Colorado towns and cities as inspiration for settings in her stories. She's the mother of three girls, who provide plenty of fodder for her YA novels. Cindy writes speculative fiction and YA fiction, filled with a healthy dose of romance. You'll often find her hiking or listening to any number of playlists while she comes up with her next story idea.