Check out my stop on the blog tour for Ionic Attraction by D.R. Rosensteel from Entangled Teen! 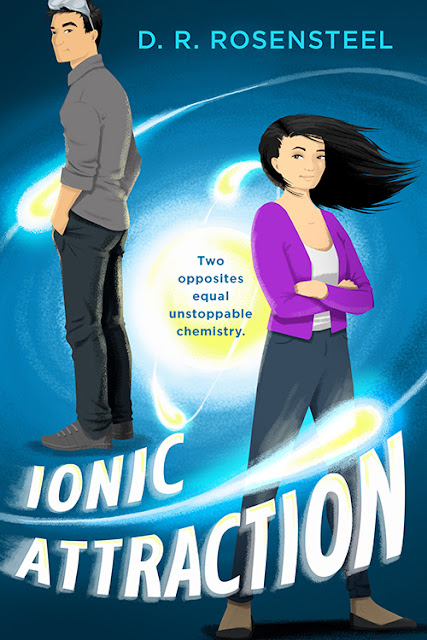 Zach’s got a secret. The only reason he’s agreed to an internship at the Mastermind Complex, a high-tech academy for teens, is to use their supercomputer to find the person who framed him. He never stole anything but was locked up in juvie anyway. Now he’s out, he’s got a plan, and nothing will get in his way…not even the girl he’s been partnered with, who excels at proving opposites attract.


Jane’s got a secret. She was the informant who led to Zach’s arrest. Did she mean for that to happen? No way. And now she has to work with him to save the world. Because an “internship” at the Mastermind Complex is actually a program to train super-geniuses as soldiers in a war of the minds. Zach’s and Jane’s intellectual skills complement each other, making them an unbeatable pair.

She can’t resist their ionic attraction, but if he ever discovers the truth, she’ll lose him forever. And worse, breaking their partnership would mean sacrificing all the innocent lives depending on them.

D. R. Rosensteel is a research consultant who had no intention of writing anything but technical papers describing his theories of metaphysical psychometry. But when a hoodied teen showed him a device that turned her thoughts into weapons, and told him about a secret society of protectors who trained her in their underground Academy, he knew her story had to be written. Rosensteel has put his research on hold to document the adventures of a girl whose face he's never seen and whose real name he'll never know.
Website  Goodreads  Twitter
Αναρτήθηκε από Anastasia Gkaitatzi στις 00:01