This is my stop during the book blitz for Best Friends…Forever? by Krysten Lindsay Hager. This book blitz is organized by Lola's Blog Tours. The book blitz runs from 14 till 20 September, you can view the blitz schedule on the website of Lola’s Blog Tours. 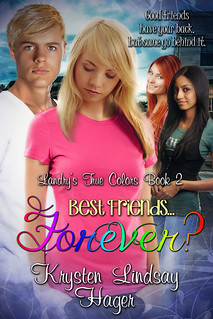 Good friends have your back, but some go behind it.

Landry Albright hopes the new year will start off in an amazing way—instead she has to deal with more frenemy issues, boy drama, and having most of her best friends make the cheerleading squad without her. Suddenly, it seems like all anyone can talk about is starting high school next year—something she finds terrifying.


Landry gets her first boyfriend (her crush, Vladi Yagudin), but the relationship starts to go south just as things come to a head with her friends. She feels lost and left out, but finds good advice about dealing with frenemies from what she considers an unlikely source. Landry faces having to speak up for what’s right, tell the truth (even when it hurts), and how to get past the fear of failure as she gets another shot at competing in the American Ingénue modeling competition. Will Landry get a second chance with her friends, fame, and Vladi?

You can find Best Friends... Forever? on Goodreads

You can watch the book trailer for Best Friends... Forever? on Youtube

You can buy Best Friends... Forever? on

“Landry, it’s gotta be so awkward for you to be going to Vladi’s school next year,” Tori said. “I mean, what if you run into him during the tour?"


Tori raised her eyebrows as if to say, “Yeah, right,” and went back to her sandwich. Meanwhile my delicious homemade soup was no longer sitting well. It never occurred to me Vladi might be around during the first pre‑freshman tour. I would be mortified if I ran into him and he was with a girl. Or worse yet, running into him, and he was with Yasmin. Plus, I hadn’t told my mom about the breakup, so if she saw him, she’d probably go over to talk to him. I could already imagine it: “Landry, Vladi’s here! Hon? Why are you hiding behind the garbage can? Your boyfriend, Vladi, is here. Come say, ‘hello.’ Stop trying to run away. Why is everyone laughing and pointing at you and calling you a ‘loser dumpee?’ What does that mean?”


Well, maybe the world would end and I wouldn’t have to deal with high school or Vladi and my mother running into each other.


Sadly, the world did not end, and on Thursday, we all had to go to the high school for a freshman information night from 6 to 9 p.m.

First book in the series 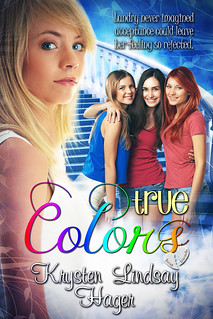 A little competition can really bring out people’s true colors.

Landry Albright just wants to be one of the interesting girls at school who always have exciting things going on in their lives. She wants to stand out, but also wants to fit in, so she gives in when her two best friends, Ericka and Tori, push her into trying out for a teen reality show modeling competition with them. Landry goes in nervous, but impresses the judges enough to make it to the next round.

However, Ericka and Tori get cut and basically "unfriend" her on Monday at school. Landry tries to make new friends, but gets caught up between wanting to be herself and conforming to who her new friends want her to be. Along the way she learns that modeling is nowhere as glamorous as it seems, how to deal with frenemies, a new crush, and that true friends see you for who you really are and like you because of it.

You can find True Colors on Goodreads

You can watch the book trailer for True Colors on Youtube

You can buy True Colors on

While I was deciding whether or not to chicken out, the stage manager, Georgia, started having the girls go out on stage. I overheard somebody say one girl fell out of her shoe as she stepped on the runway.
“Is she okay?”
“Yeah, she’s fine. She just pretended to have two heels on and walked on her tip toes,” Georgia said.
I would have burst into tears and run off the stage — kind of like I did when I was four years old and in a dance recital. We were supposed to be little ballerinas and have scarves attached to our tutus, but my mom was still in school at the time and she came home late and forgot to give me my scarves. So all the other little girls pulled out their scarves, and there’s a video of me looking on either side of my tutu for my scarves and then bursting into tears crying “Mommy!” as I ran off the stage. My grandmother said I was adorable, but I don’t think it was any coincidence my grandfather died two weeks later.
At least I didn’t have to worry about missing scarves tonight. All I had to do was focus on not tripping. If I could just make it down the runway and back, I’d be fine. Unless, of course, I suddenly came down with Tourette’s Syndrome and started swearing live on the air… but I’d know if I had Tourette’s, right? It doesn’t just come on out of nowhere, does it?
“Okay, girls. Your group is next,” Georgia said.
I took a deep breath. All I had to do is say, “My name is Landry, and I’m from Grand Rapids.” Easy—as long as I didn’t get the dry heaves or puke into the microphone and electrocute myself…or get diarrhea on live TV. Why did I ever go to the audition in the first place? Everything was fine when I was just boring old Landry fading into the background. The girls at school were a lot nicer to me when I was nobody special. I mean, before this stupid competition I had friends, but now it seemed like there was no one I could trust. Maybe if I lost this stupid thing I could go home and everything would be back to normal.
“Okay, girls. You guys are next.” Georgia pushed me in the back. “Don’t forget to smile,” she said in my ear.
Then the girl in front of me morphed into a different person. She straightened her spine and walked with a little skip in her step. “I’m Desiree, and I’m from Sterling Heights,” she said in a low sexy voice. Great, I had to follow her.
“I’m Landry, and I’m from Chicago, Illinois,” I said. I moved away from the microphone and realized I said “Chicago” instead of “Grand Rapids,” so I went back to the microphone to correct myself and slammed into the next girl. She acted like she didn’t notice, but I had hit the microphone and it made a shrieking noise. I heard laughter. People were laughing at me. On television. I wanted to die.
I saw Georgia gesturing at me to get off the stage, and I walked off. I had been practicing my stupid runway walk for weeks and for what? A chance to humiliate myself on live TV? I’ve always been sorta accident prone. If anybody was going to do something stupid and embarrassing it was probably me, but I thought I could control myself for two seconds on live television. I’m such an idiot.

From Teenage Book Recommendations in the UK: "This is a fantastically relatable and real book which I feel captures all of the insecurities and troubles which haunt the modern teenage girl. It is about a young model who has to go through tough times when she is torn between a life as a model and managing her friendships. You learn which friends she can most trust and which will create the drama typical of teenage life. Follow the life of Landry and try to see if you can find out which are her true friends before their true colours are revealed. This book is all about relationships, hopes and truth. I loved this book!"

“This book is such an inspiration for those who just care about their looks and are tensed about them. This thing is looks aren't everything. This book is related to every teen's problem. Hager has written a very inspiring novel.” 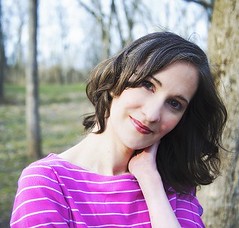 Krysten Lindsay Hager is the author of the Landry’s True Colors Series, a clean reads young adult series. Krysten writes about friendship, self-esteem, fitting in, middle school and high school, frenemies, modeling, crushes, values, and self-image in True Colors and Best Friends…Forever? as well as her standalone YA release, Next Door to a Star.

Krysten is an Amazon international bestselling author and book addict who has never met a bookstore she didn’t like. She’s worked as a journalist and writes middle grade, YA, humor essays, and adult fiction. She is originally from Michigan and has lived in Portugal, South Dakota, and currently resides in Southern Ohio where you can find her reading and writing when she’s not catching up on her favorite shows. She received her master’s degree from the University of Michigan-Flint.

There is a tour wide giveaway for the book blitz of Best Friends…Forever? These are the prizes you can win: