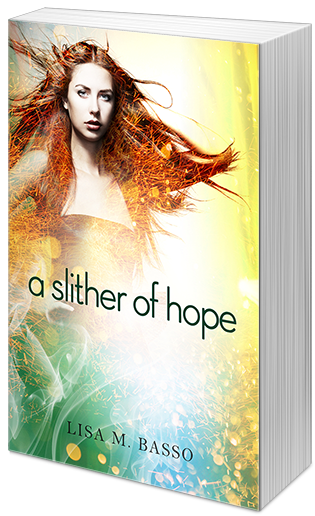 About A Slither of Hope

Rayna struggles to piece her life back together, but hiding in plain sight from the police, the SS Crazy, and the Fallen isn’t a foolproof plan—something Kade, the World’s Worst Roommate, reminds her of everyday. The late nights of failing to teach Ray how to protect herself against the Fallen are getting to Kade, changing him in ways he doesn’t like, and after a family emergency sends Ray back into Cam’s arms, Kade decides he’s had enough. News of Rayna’s resurfacing brings both angels and the Fallen to San Francisco by the dozens, all eyes scouring the city for the girl with the gray wings. Rayna will need both Kade and Cam’s help to ensure her family’s safety, navigate the new dangers and enemies springing up all over the city, and manage the surprises that arise with her new set of wings.


Purchase A Slither of Hope on

Rayna is confused and frustrated now more than ever. She has no idea what's going on with her and nobody seems to have the answers she's looking for. However, she's a strong character. She can take care of herself and she doesn't want to rely on anyone.

In this second installment in the Angel Sight series, we learn a lot more about Kade's past and how deeply connected he's with Rayna. He wants to be with her but he doesn't make the first step because he's waiting for Rayna. He wants this to be her choice. He would do anything for her, even kill or get killed in order to keep her safe but she's still not over Cam.

I believe that Rayna fell for Cam first and not Kade because he was an angel which means he's one of the good guys. But when  Rayna needed help, Kade was the one who rescued her from the SS Crazy and kept her hidden.

A Slither of Hope picks up where A Shimmer of Angels ended, with Rayna moving in with Kade. Everybody is looking for her, the police, the SS Crazy, the Fallen, the angels and of course her family. For Rayna, being seen in public is no longer an option. The only thing she has to do is keep training with Kade and staying out of trouble. But when her father has an accident, she must go see him and her little sister.

Apart from the family drama, she has to deal with the new pair of grey wings she now has. She must learn how to fly and why are they grey, when the angels have white and the Fallen black. The wings put her in grave danger because now she's a target. Both the angels and the Fallen want to use her as weapon in the war between the two supernatural creatures.

And let's not forget about boy trouble. There are times where she can't stand Kade and other times she wants to kiss him. With Cam, things are different. She can't be with him because then he will end up exactly as Kade, a Fallen.

Moreover, we find out the shocking truth about Rayna's mother insanity and death.Who did this to her and how does this affect Rayna? Let me tell you this: you will not see it coming!

I have to say that A Slither of Hope lived up to my expectations! It's a powerful, action packed sequel with strong characters, a beautifully written story with the right amount of romance and a cliffhanger that will make you anticipate the next book even more! 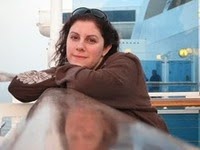 Lisa M. Basso was born and raised in San Francisco, California. She is a lover of books, video games, animals, and baking (not baking with animals though). As a child she would crawl into worlds of her own creation and get lost for hours. Her love for YA fiction started with a simple school reading assignment: S.E. Hinton's The Outsiders. When not reading or writing she can usually be found at home with The Best Boyfriend Fiancé that Ever Lived ™ and her two darling (and sometimes evil) cats, Kitties A and B.

· Four (4) winners will receive a digital copy of A Slither of Hope by Lisa M. Basso (INT)

· One (1) winner will receive a digital copy of A Slither of Hope by Lisa M. Basso AND a $10 Amazon Gift Card or B&N Gift Card – Winner’s Choice (INT)