Book Blitz:Dancing on the Edge by Kit Bakke {Excerpt} 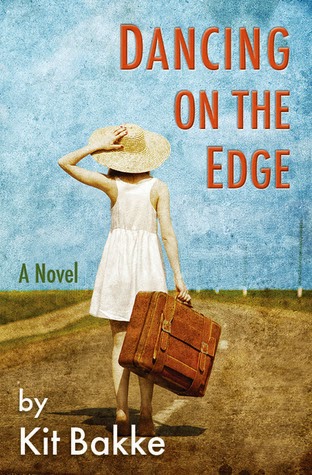 Twelve year-old Dot is not a dancer, but after her mother’s sudden and senseless death, she finds herself dancing on the edge…of everything. After her whole world unravels in seconds, Dot is propelled on a voyage to discover the meaning of her past, and of her mother’s greatest gift to her.

With all familiar anchors swept away, Dot’s trip becomes a struggle between finding that gift and running away from a future that feels so bleak. Pack your bags for a memorable, powerful journey into life in the wake of profound loss.

Purchase Dancing on Edge on

From Chapter 26: Dot to the Rescue

The yelling was repeated, and it was coming from far below. Forgetting about the ladies hiking in long skirts, Dot planted her feet and leaned carefully across the top of the stone barrier to peer down the steep side of the hill. She heard the yell again, from straight down and slightly to the right. She could see a pile of rocks and some stubby, green bushes. Amongst the brown and green she saw something bright red and what looked like sprawled arms and legs. Suddenly dizzy, she turned away quickly. “Down there!” she croaked at Aunt Tab, who’d snorted herself awake.

Aunt Tab hitched herself over to where Dot was leaning with her back against the rock. “It’s okay. I’ll look,” she said, and wiped Dot’s sweaty forehead with her sleeve.
Aunt Tab peered over the rock and saw what Dot had seen. Looking more closely, the patch of red moved, and soon resolved itself into a long-sleeved shirt or jacket and the person in it appeared to be trying to wave. Aunt Tab waved back, and yelled down, “Do you need help?”
“Help!” came wavering back up the hill.
“I’ll go,” Aunt Tab said, clambering over the stone barrier in a very awkward, old lady sort of way. She immediately lost her footing and fell, tearing holes in the knees of her pants.
Dot reached for Aunt Tab’s disappearing shoulder. “You can’t do that. I’ll go.”
Aunt Tab gratefully grasped Dot’s hand and scrambled back to level ground. “Trails are one thing, downhill cross-country, something else entirely,” she apologized. “And it’s just a jacket—the red is just a jacket.”
Dot gave her aunt a crooked grin and looked at the bright blue sky above her. Fortified, she scissored her legs over the stones and prepared to make a controlled slide down the hill. “Here, take the water.” Aunt Tab tossed her the bottle as Dot dropped below the level of the path.
Dot’s free hand grabbed at branches as she traversed across the face of the steepest parts, trying not to tumble down on top of whomever was at the bottom. About half-way down she stopped to catch her breath and map out her next steps. She felt brave and scared and daring and kind. She was going to rescue someone!
She noticed that her feet gripping crosswise on the steep slope were kicking down sheets of pebbly landslides. She hoped they wouldn’t get bigger, like those helicopter snowboarders she once saw on TV, who skied right through their own avalanches as they zigzagged down vertical snowfields. It wouldn’t be good to bury the person you were trying to save.
She could hear Aunt Tab shouting directions from above—“go right” or “go left”—but she ignored them because she was switching back and forth so much anyway, and she didn’t know if Aunt Tab meant her own right or left, or Dot’s.
Signaling to Aunt Tab that she was doing fine, Dot took careful aim at a spot near but not on top of the person below. The red splotch was now clearly and safely just a jacket. She couldn’t make anything else out very well, blue jeans maybe, and possibly a green daypack off to one side. This was a game of Slip N’Slide in real life, she thought, as she got into the rhythm of moving her arms and legs from rock to branch to slippery foothold. A memory from a million years BT bubbled up—her mother laying out the plastic Slip N’Slide sheet and dousing Dot and Junie with the water hose, the water sparkling in the sunshine and cooling their summer-warmed skin. Not now, she said to herself. She didn’t want to be distracted from the present.
She waved at the red splotch below and yelled, “I’m coming!” She wished she had a walking stick
to wave and point like Miss Wordsworth and Miss Wollstonecraft.
A few marginally controlled slides later and Dot was at the level of the bushes just above where the person lay. She could now see him clearly, for it was definitely a boy. Not only that, it was definitely the only boy she knew in England and not only that, it was definitely the one boy she disliked the most in the whole world. 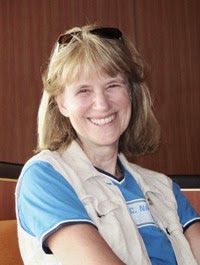 Kit Bakke spent the last half of the 20th century as a political radical (SDS and the Weather Underground), a pediatric oncology nurse, and an information technology consultant. In the 21st century, she became a published writer. Her MISS ALCOTT'S E-MAIL has led to further writing adventures, including being a founding member of Seattle7Writers (www.seattle7writers.org) and a chapter in HOTEL ANGELINE. Her latest book, DOT TO DOT, is a story of travel, discovery and possibly magic. Young teens, if they are good readers, like it, and so do adults.