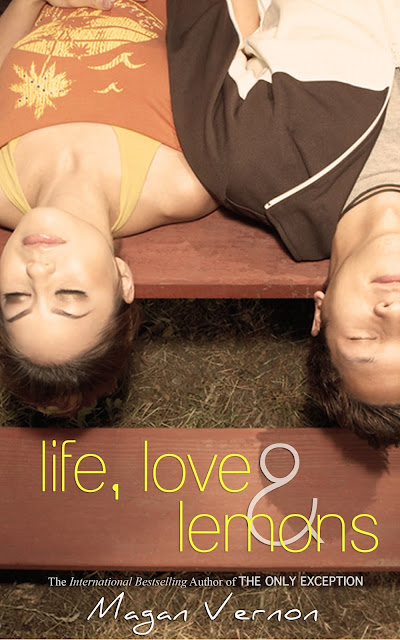 When life hands you lemons, sometimes you have to say screw the lemons and bail.

Seventeen-year-old Bentley Evans had it all. Then her Dad got laid off.

Now she has to move across town to a small apartment and leave her life of luxury for public school and a job at the local burger place. Just when her world seems like it's crumbling she finds solace in the unlikely punk boy next door, Kai Stone. But as their relationship blossoms, a jealous ex-girlfriend and a secret to tell that threatens to bring disaster back into Bentley’s life.

From Monday to Friday it was like everything had changed. Instead of walking through the halls alone with my head down, Kai was always by my side. This, of course, led to some very interesting stares and nicknames from people. I think my favorites were Bonnie and Hyde or Sid and Nancy Drew. Anything people could think of to come up with a couple name for the punk kid and the preppy girl. There were others, but the East High kids could get pretty raunchy when they came up with some of these nicknames.


“Do you still want to go watch Grant and Brody’s band play on Saturday?”


It was that lull after I had fourth period gym class and before lunch. I was leaning against my locker, and Kai pressed his palm against the other locker and faced me.


I still wasn’t sure what to think of Grant and Brody. They were nice and all, but I always felt like they were gawking at me like I was some sort of a zoo exhibit.


The truth was that I already asked my parents about the concert. Mom just rolled her eyes and couldn’t believe that her daughter wanted to go to some crummy warehouse to sweat with a bunch of teenagers, but Dad was a little more interested. Just by asking about the concert hosted a whole slew of questions about the bands and who I was going with. I especially got nervous when he started asking questions about Kai.


“What do you mean maybe?” He asked as he ran his tongue over his lip ring. We still hadn’t kissed. I was pretty adamant about the whole not kissing until he was my boyfriend thing. But I couldn’t deny how much I thought about his lip ring.


“I mean, maybe I’m busy or something." I twirled a strand of hair around my fingertip.


“What? Are you going out with one of your other boyfriends or something that night?" He leaned in closer. A couple of jocks walked by and yelled some disgusting comment, but I pretended like I didn’t hear them.


“I don’t have any boyfriends at all, so I really wouldn’t be going out with any of them, now would I?" I batted my eyelashes.


“Why don’t you be my girlfriend then?” He traced his free hand down my arm, full-on putting on the charm.


“Maybe," I answered very quickly, almost too quickly, since he blinked really hard.


“What do you mean, maybe?” He tilted his head to the side and he reached down to grab my hand.


“Ew, get a room." A very tall girl with fiery red hair and cat’s eye glasses yelled and then walked over to us.


“Teegan, if you think that hand holding is bad, then you really need to get out more,” Kai quipped, quickly looking from me to Teegan.


“Oh, I saw plenty of that with you and Brynne. Remember I’m her band mate,” Teegan snarled and walked closer. “But when it’s with little Miss Sandra Dee, it’s kind of disgusting.” She giggled and headed over to a group of girls a few lockers away. Once I caught sight of the group I immediately saw Brynne’s big green eyes glaring in my direction.


“Do you really want to have to keep dealing with that every day? The weird vampire girls and jocks talking about us? Because that’s what you’re going to get,” I said, looking up at him. My cheeks were still hot after Teegan’s comment and I hoped I didn’t look too embarrassed.


He laced our fingers together. “I wouldn’t be still standing here if I didn’t want to be with you." He looked from our hands and back down to me. “Now what do you say, will you be my girlfriend?”


He started to roll his eyes when I got up on my tippy toes placing my hands on the back of his neck. I slowly pulled him closer as our lips met for the first time. I couldn’t believe how warm and rough his lips were in contrast to the cold and smoothness of his lip ring. Nor could I believe all the people that were cheering as he pulled me closer to fully envelope himself in the kiss. I didn’t want it to end and swear I literally almost melted in his arms when I felt his tongue on my bottom lip.


A large hand thrusted between us, knocking our bodies apart. I got off of my tippy toes and quickly let go of Kai as I turned to see my gym teacher, Mr. Brown, with his large and quite furry hand placed firmly in the middle of me and Kai. He faced Kai with his spit-stained mustache.

Magan Vernon is a Young Adult and New Adult writer who lives with her family in the insurance capital of the world. She is in a very serious, fake relationship with Adam Lambert and constantly asks her husband to wear guyliner. He still refuses. She also believes her husband is secretly an alien, disguised as a southern gentleman.