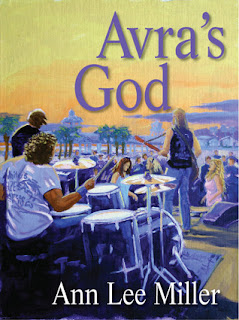 Avra’s God. As in a well-written and thought-provoking (in a good way) book by Ann Miller. The book tells the story of two boys, Cisco and Jesse, and two girls, Avra and Kallie. The girls are completely different from each other but they still end up being best friends. There's Avra who is kind, generous and religious and then there's Kallie who is out-going and never has really thought of turning to God in order to get some answers as far as her life is concerned.


And there are also the guys. Cisco and Jesse have been friends for a long time. So starting a boy band seemed like a pretty good idea. And it turned out to be a great one. Neither of them thought that they could find true love and be with the one they want. But when Cisco notices Avra, he can picture their future together. But Avra isn't like the other girls he used in order to get through his parents’ divorce. He has feelings for her and she seems to return them but she wants to move slowly, thing that Cisco isn't comfortable with but he accepts it. But when Avra can't take the pressure anymore, she says goodbye to Cisco even though it breaks her heart and Cisco returns to his on and off girlfriend. He thinks he can forget about her but when he realizes that he can't live without her, he will do everything he can to apologize to Avra.


Jesse and Kallie’s case is simpler. They meet, fall in love but never admit it to each other. And that's where their story begins. Jesse needs help with his voice and songs, so he asks from Kallie to help him become a better artist. But what starts as innocent meetings turns out to be a love story that gets cut by Kallie because she knows that she can't be with someone like Jesse. At first, he thinks that's for the best but can you lie to your own heart? So, he tries to win her. He writes songs and performs them just for her but making her his isn't as easy as it seems..

All in all, Avra’s God is worth reading. The characters are realistic and full of emotions just like us. God is mentioned a lot of times throughout the story because that's where the characters turn to when they are looking for answers, the plot is dramatic and the end…let's just say that it's a good one.