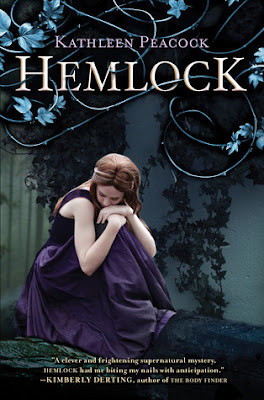 Mackenzie and Amy were best friends.

Since then, Mac's life has been turned upside down. She is being haunted by Amy in her dreams, and an extremist group called the Trackers has come to Mac's hometown of Hemlock to hunt down Amy's killer:
A white werewolf.

Lupine syndrome--also known as the werewolf virus--is on the rise across the country. Many of the infected try to hide their symptoms, but bloodlust is not easy to control.

Wanting desperately to put an end to her nightmares, Mac decides to investigate Amy's murder herself. She discovers secrets lurking in the shadows of Hemlock, secrets about Amy's boy-friend, Jason, her good pal Kyle, and especially her late best friend. Mac is thrown into a maelstrom of violence and betrayal that puts her life at risk.

Jason may have been Amy’s boyfriend but his heart belongs to someone else. He has managed to keep it a secret from everybody, except Amy, for years and now after loosing his girlfriend and has drunk his sorrow away, he thinks it's time for this someone else to finally know how he feels about her.

“It had never occurred to me that I could lose Amy twice, but that's what it felt like. It felt like I was losing her all over again.”

Kyle finally admits his feelings to Mackenzie and she feels the exact same way. Throughout the book, a storm of emotions can be confined between the two of them. It doesn't end well but Mac isn't ready to give up...yet

“You can't lose what you never had.”

Amy is dead but not gone and she wasn’t as loyal to Jason as everyone thought she was.
Mackenzie wants to find who killed Amy so bad that she comes across a terrible truth about Kyle.
The Trackers have taken over the town. Amy's killer is somebody everyone knows and he's a big part of Mackenzie's life. Everyone is in danger and nobody is safe. Especially Mackenzie.
The first book in an amazing werewolf trilogy.